Like every hobby, Tabletop RPGs have a plethora of tropes that exist throughout the community. Many of those revolve around the party meeting, acquiring adventures, or travelling down the road of the ubiquitous murder hobo. Dune Adventures in the Imperium has a unique take on forming the adventuring party that is entirely different from meeting in a tavern.

Houses in Dune are a conglomerate of many modern aspects of life. They are the government, organizing structures, job providers, land owners, and connection to the rest of the universe. Because Dune is a sci-fi fiefdom, the impact of Dune houses on the players is second only to the actual characters the players will create themselves. As such, it is important that the players have input into the house alongside the GM.

How to Create a House in Dune Adventures in the Imperium

Dune Adventures in the Imperium has put together a simple but effective creation process, as well as provided a house sheet to keep track of all the details. A completed example house will be available at the end of this guide. For a quick rundown of the full process, we have a video guide you can watch here.

For quick reference, here are the major steps needed to complete a house.

The story and role-playing aspects of the house are easy to setup, and have no direct impact on the game mechanically. These story elements are important in helping drive impacts and persona of the house in game. As a GM, these elements are very informative of the type of game your players are looking to play. Combat, agent vs architect, political intrigue, etc.

When creating the house, start with the big picture and discuss these story elements. During this step you should discuss and choose a house name, crest, moto, home world, house size and descriptive trait. Alongside these items, you will want to discuss the house goals, and what part they play in the overall universe.

Some excellent things to think about are how combat oriented is your house? Is your world made up of farmers, manufacturers, or religious leaders? Do they have a religion? Is the house leadership ambitious to grow? Are they loyal to the other houses or do they play cut throat politics?

While working through these ideas, work with the players to come up with the houses descriptive trait.

The descriptive trait should be one or two words that the house anchors around. Loyal, brutal, mischievous, cunning, militaristic, artistic, secretive. This trait will help the players and the GM better understand and define the house, as well as will eventually become the House Trait.

Along with these general items, you should come up with a home world name, and determine the details of the world. What is the general environment? Who are the denizens and how do they see the house leadership? What makes the world special? Does it have unique technology, beliefs, or creatures?

While discussing these story elements, the party and GM will start to decide what House Type, or size, the house will be. The size of the house will determine how much land is under the house’s control, as well as how many domains, or specialty’s the house will have. This information is important to think about while the players create their home world.

If the team wants to control an entire planet for example, they will want to play a Major house.

The house type will impact your game by setting how much threat the GM will receive each session, how many traits the players house will have at the start of the campaign, and how many rival houses the team will be dealing with throughout the story.

Once you have a better idea of your new house’s home world and interests, it’s time to formalize all of the domains that your house will be involved with. The number of domains is dependent on the house type which can be found on page 87 of the Dune core rulebook.

In short, based on the house type, the players will need to determine anywhere from 1-2 primary domains, and 0-3 secondary domains.

A primary domain is a service, good, or technology that your house dominates. Throughout the universe, there are only a couple of houses they may be able to complete with them in these particular markets, and they are known through the empire for their goods or services in this field.

For example the guild’s primary domain is interstellar travel. There is no one else in the universe that can really compete with them, and even other faster than light travel or services are as good. So the players house should consider the domains while thinking about the home world. If the house wants to specialize in farming it would be difficult to have a barren home world.

Secondary domains are the markets that your house competes in, but are much less effective. These domains can also be an aspect of your house that is simply not as well-known as the primary domains. A house that is well known for farming, may also manufacturer a significant portion of its own farming equipment. While its food products may be sold around the universe, its reach to sell the equipment to farm those goods may only extend to the other houses in the same solar system, or nearby systems.

A brief list of domains can be found on page 88 of the Dune core rulebook.

While the house domains won’t have a direct impact on any in game values, they will decide what types of traits the house will have access to during the creation process.

Once the team has selected the domains, they will need to finalize the house traits. An in depth description of traits, and how to use them, can be found in the core rules section of the rulebook starting on page 144.

The brief overview is that traits can be applied to any relevant skill or combat test to change the difficulty of that test. For example, if a house has a trait of trustworthy in the religion area of domains, then they would be able to reduce the difficulty of convincing a local clergy member to believe them by 1.

When playing, for 1 momentum point any player can activate any house trait for a scene, giving them the effects of that trait as if they had it themselves. This can be used for as many traits as the house currently has, and for any numbers of players as long as the team has enough momentum. This ability to apply a trait to the entire team can quickly tip the scales of a skill test that is within a houses domain.

During the creation of a new house, a trait should be selected for each primary domain that the house has. Additionally, these traits need to be in the same area as the primary domain.

The last trait that the house will have is the descriptive trait that defines the house which you should have already determined during the creation of the house’s background elements.

While the roles and enemies won’t have a mechanical effect on the game, they will help to drive the story, pacing, and direction of the game. Taking some time to get a few details regarding each role and information about the rival houses will give you a big head start on generating important NPCs, antagonists, and story pinch points. NPCs that your players help craft will give them extra weight when in game they give the team advice, missions, or experience hardship.

The last aspect of the house to create are the major roles. There is a list and description of the roles on page 92.

It is time consuming, but very helpful to have the players give a bit of input for each role of the house if they decide to fill those roles with NPCs. Giving them a connection to these special members of the house will give those NPCs more impact during the game. If the players feel more attached, they will be more likely to follow their advice, or be impacted if something bad should happen to one of them increasing the suspense of your games!

Additionally, having the roles initially filled by NPCs and not the players will give them a clear path of growth as they climb the ranks of the house and possibly eventually become trusted advisors.

Finally, once the players house has been completed, it’s time to build out their rivals. Again, the number of rival houses is dependent on the house type that is chose, but in general the bigger the house the more enemies that house has.

If your players are up for adding more details to their enemies, let them! The more NPCs or ideas they provide to build out the enemy houses will add to the impacts those houses can have when they appear in your sessions.

If you and your players are struggling to fill out the details, you can run through the random tables that are provided in the core rulebook on pages 96 and 97 to generate the rival houses.

As you complete the house, or move from one step to another, go back and tweak or add to anything that may have been changed during the previous discussions. Most importantly, it’s helpful to be flexible during the creation process and during the early sessions of the game.

House Syntol is a Major house from the twin worlds of Hindred and Sairo. They are diplomatic brokers often acting as the mediators between the Great Houses of the Landsraad.

As a Major House, they have a single primary domain, as well as two secondary domains. Based on their envoys calm and calculating demeanor during stressful dealings, they have the descriptive trait of methodical.

The house roles have been filled out with NPC names, but little details have been documented. This allows for a quick reference once the players begin to interact with the house, but allows for the flexibility to create the NPCs using the in game method described in the character creation section of the Dune core rulebook.

A few more details have been documented for each of the enemy houses as an in game reminder of why the houses are at odds. If you are looking for an already setup house, feel free to use the example house in your next game! 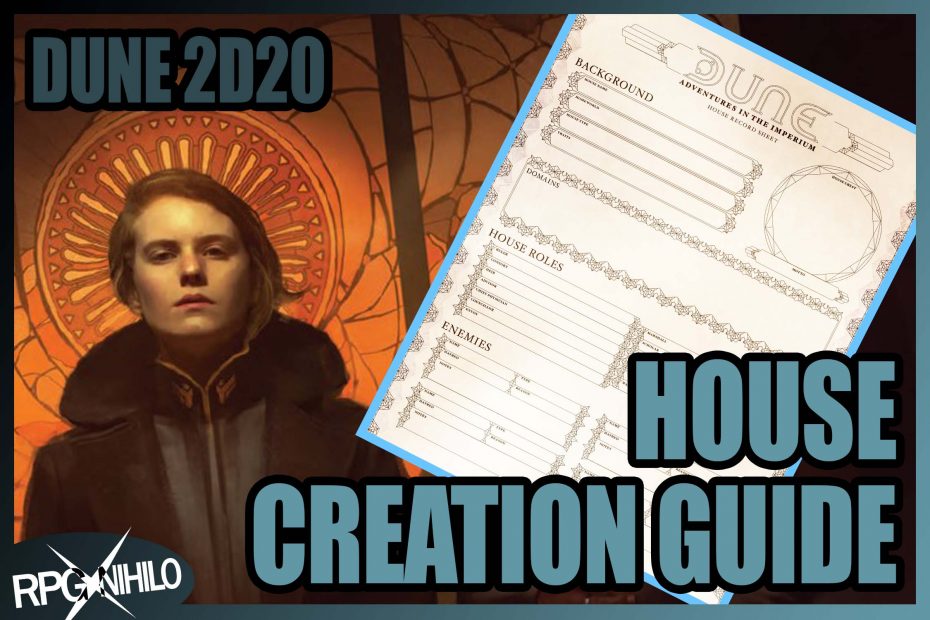