How to Run Large Combat Without Slowing Down the Game

After running a modern TTRPG campaign for over a year, one specific issue kept popping up in our table’s stories that was difficult to manage. Combat with large groups of NPCs.

Encounters with large groups happens throughout all TTRPG stories. Epic battlefields, hordes of zombies, armies of soldiers, or caves full of goblins. Unfortunately combat with more than three villains starts to become slow. The turns become muddled with lots of dice rolling if each bad guy is played by the standard rules. Game systems with targeted shots, confirmed critical hits, cover statics, and other multiple dice rolls only compounds the issue.

Most of the difficulties and draw backs of major combats are caused by the need for the game master to run multiple NPCs each round. The effort to run each NPC as a unique character creates a lot of time where the players aren’t playing. Descriptions become repetitive, theater of the mind combat becomes muddled, and managing the game almost requires a second game master.

Reduce the Number of Actions You Take

One of the best ways to run a successful combat with large numbers of NPCs is to reduce the number of individual NPCs you as the dungeon master control each round. There are many ways to accomplish this task, but the key to all of them is to not let the multitude of NPCs disappear to far into the background.

A tactic to keep the characters and combatants front of mind is to make sure you are mentioning them each round. While the goal is to reduce the amount of time that the players aren’t acting, I have found giving at least a brief description each round of what the NPCs are doing helps to keep them relevant.

There are many ways that you can reduce the number of activities you need to perform each round with your NPCs while keeping the narrative number high.

Large groups of people cluster, push, stampede, crush, and trample. The best way I have found to deal with large groups in combat is to treat them as a singular hazard. Treating the swarm of NPC combatants this way will allow you to quickly deal with all of their actions at once while still being able to describe them in exciting ways.

When the combat starts, or before if you are one of the rare planners, determine how the plethora of NPCs will interact with the party, and what the consequences will be. This makes it very easy to once each round acting for the entirety of the mass of NPCs.

If you are on an open battlefield, this could take the form of arrows, cannonballs, or artillery falling each round and dealing a certain amount of damage, or triggering some kind of reaction from the players. Treating large groups as an environmental effects allows you to focus on one or two big baddies while keeping the feel of large combat.

Environmental effects aren’t just limited to projectiles. Crowds of people could be running through the fight and anyone who gets smacked falls prone. Henchmen will form walls around a combat and attack anyone who gets too close. Street urchins and beggars may take the opportunity of people fighting on the street to take and steal from the fighters.

If using spectators as caltrops isn’t your thing or you can’t come up with a way for your NPCs to get involved in the fight, then do the easiest thing and take them out of the combat.

The quickest way to limit your actions to a few villains is to create counter balancing obstacles.  If the team is going up against armed officers, have those officers dealing with a riot and unable to engage the players.

On a battlefield, big or small, there can always be singular skirmishes that occur in the whirl wind of the larger battle. Using this method each round you can describe the sights and sounds of the combat the team is a part of without having to slow down the fight with dozens of actions or rolls.

An advantage to using this method is that you can add an incoming threat to heighten the tension the players feel. Describe each round how their side is losing and soldiers are starting to take notice of them. A large armada can be seen in the distance and only a few rounds away from being with artillery range, and this is forcing all of the other NPCs to fall back to safety.

Creating a reason to remove the NPCs from the fight entirely can still create great narrative and a thrilling experience.

An option which can be used in conjunction with the other ways is to limit slow down is to have combat focused around a non combat goal. Have hordes of zombies charging their way toward a small group of survivors? Have the combat end when the players get to high ground instead of killing all of the creatures.

The crew may need to get to a relic to banish an onslaught of eldritch horrors, find an escape vehicle while being chased by gangs, or open a sewer gate to flush all of the under city mole people out of their path.

In each circumstance, you have an opportunity to continually emphasize the large threat around the players all while allowing them to drive the action of the combat. Once the team is beaten and shaken a bit, throw the big bad in for the climax for a fun encounter.

One way to run multiple NPCs with what feels like individual actions is to have one or two big baddies, but the rest of the crowd act according to the minion rules. Dungeons and Dragons and other games already have some of these systems in place.

Imaginary Jeremy has a fantastic video on this topic of minion rules that you can watch here.

Some of the systems still slow down combat, but they are easier than running multiple pre-made characters as NPCs.

Implementing a similar system is easy however if you just treat the NPCs as already injured, or hurt from the combat happening around your players. Many of these system involve a one hit system for minions. There are multiple ways this could be handled narratively to fit your style.

Just like the players, the NPCs in the fight will be taking hits and getting hurt. When the team choose to engage the multitude of baddies on the field, express that they are already injured, tired, or otherwise engaged with other fighters.

Fun Before Realism (Unless Realism is Fun)

This article is written with the principle in mind that the game master weights the fun of the table over following all the rules all the time or the realism of the situation. For the tables I mostly play around, this comes as a balance between trying to hold to the rules, but not stopping play for each judication.

Obviously, this may not be the same for you!

If your friends prefer a more strategy based by the rules game, then determine the rules of the mass of NPCs ahead of time and make sure the players are aware prior to combat. If your crew mostly cares about roleplaying, then skip the combat mechanics and just have the players succumb to the effects of the NPCs when it is narratively appropriate.

Most importantly, it’s a game and you and your friends should be having fun in whatever way that works for you! 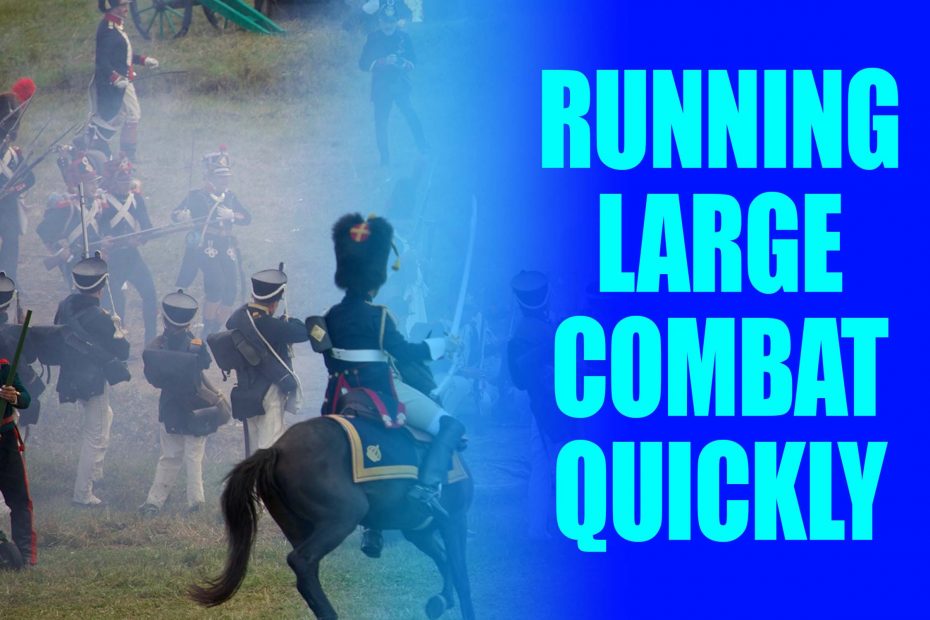