Home » Articles » How to Use Custom Maps in Fantasy Grounds

How to Use Custom Maps in Fantasy Grounds

After running a Cyberpunk 2020 campaign for the last year on Fantasy Grounds, there are quite a few things that I picked up along the way. One of the biggest weekly struggles was creating, preparing, and organizing all of the digital battle maps for each session. Between large images being slow to load, to the tokens continually changing sizes, to struggling with the grid sizes matching the tokens, there were a lot of growing pains in the process.

The first thing you will need to do is collect, download, or create the images that you plan on using inside of Fantasy Grounds. While most images will work, there are a few things to consider when planning to use them as maps in fantasy grounds.

Determine the PPI (pixels per inch) and file size.

Two aspects of the image files that may be easy to overlook but can make a big difference when playing is the PPI and the overall file size. While the PPI will affect the final image file size, it also determines how the tokens, icons, and character markers lay on the maps. The best PPI value for using maps inside of Fantasy Grounds is from my experience between 150-200 PPI. Consider when determining which maps and images to use that the higher the PPI the better the image will look but the longer it will take to stream the images to your players. The last big consideration when finding graphics is whether or not you will use maps with an already set grid.

There is not much difference when using maps that already have a grid versus those that do not because the way that Fantasy Grounds combat system works. When using both styles of maps, you will need to use the FG internal gridding layer to create a grid size that the system will recognize. We will go over this step later in the guide, but the impact it has on image selection is in regards to the image grid size. If the maps you are using do not already have a grid, you don’t have to worry about this issue.

The easiest way to locate the proper place to load the maps and other images is to start by opening fantasy grounds. The Fantasy Grounds application will save images to specific campaigns so be sure to open the desired campaign for the maps you are preparing. Open the images tab from the side menu.

Once you have the right locations, just copy over all of the digital maps that you plan on using for your campaign. After you have copied them over, you can confirm that the files were uploaded to the right location and preview how they will look by finding the files in the images tab and opening them up.

Setting up the grid and masks

Once you have the images loaded into Fantasy Grounds, open the file you need to prepare from the Image tab. If you are dealing with a large image, the window can be resized by right clicking anywhere on the image, choosing the resize button from the radial will give you multiple options. In order to set the window size so that the entire image can be viewed, choose the small size and then adjust the window as necessary until you have a good view of the entire image.

Right click again on the image and choose the grid option from the radial menu. Using the grid tool, you can set a grid on the map that Fantasy Grounds can use to calculate distances, icon sizes, and other logistics for the combat system.

For maps that already have a grid that you are happy with, take the tool and outline one of the already drawn squares from corner to corner. This will generate a grid that matches the one already drawn on the map that is functional in the software. The system should automatically set a distance value for each square based on the game rules that you are using.

If your map doesn’t already have a grid, take the tool and find a hallway, room, or object on the map that you will use as a sizing reference. If there is a hallway that you want to be ten feet wide, or a room you want to be four meters wide, use the tool to draw a grid square to take up the appropriate space. Corners work best for this step as the grid will generate along both axes from the original square that you placed down.

The grid can be removed and reset if you are unhappy with the initial layout.

Once you have a grid on the map, the mask tool at the top of the image window can be used to set your fog of war across the map to hide the unseen portions from your players.

Using the map and combat.

Now that the map has been set up inside of Fantasy Grounds, it is easy to use the system for combat. From the combat tracker icon in the upper right corner of the fantasy grounds main desktop, you can click and drag the portraits of any players or combat participants to the map. FG will automatically resize any of the icons you pull from the combat tracker or tokens you add to the map to fit into one of the grid squares.

Using the Fantasy Grounds grid layer will also help the tokens snap into place along the grid, and use the targeting features available in the combat tracker. The distance tracker will be based on the grid that you created and the base rules of the system you are running.

Congratulations! You are all set to start using your maps during your next session! 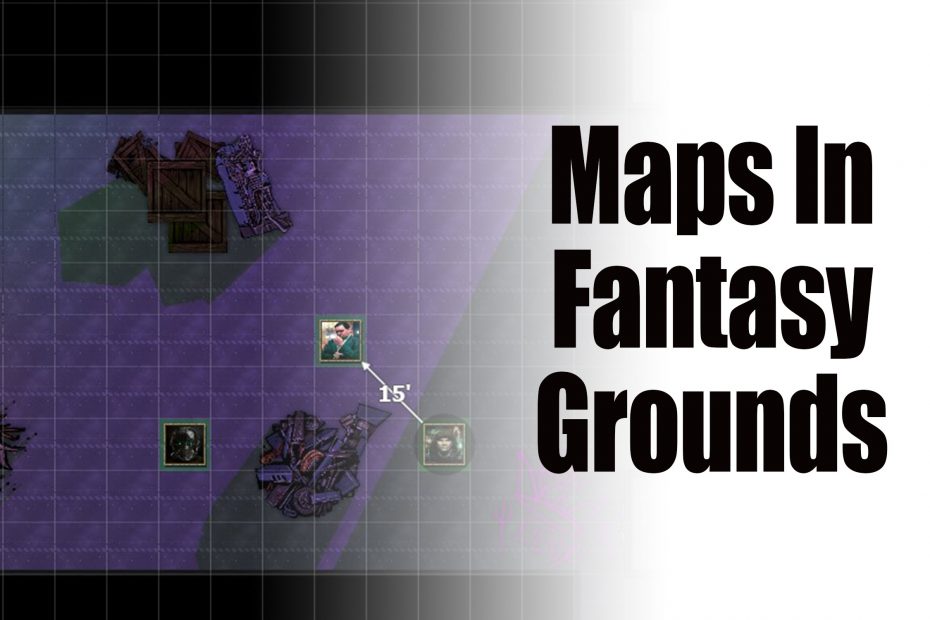